This week for Role/Reboot I wrote about the always controversial subject of racial preferences while dating. It started because a friend (who is Asian) asked if I thought it was racist to not want to date other Asians. So began a long and fascinating conversation about trying to avoid people with similar neuroses, whether those neuroses stem from being Asian, whether “Asian” is too broad a bloc to eliminate (what about South Asians? What about fifth-generation Asians? What about adopted Asians? Will they all have the same neuroses we’re trying to avoid? Probably not…)

My perspective is that you can’t make assumptions about values, beliefs, experiences, or even appearance on race. Consequently, if you say ” I don’t date ______,” the thing you’re objecting to is the census category itself (which is pretty arbitrary…) That, to my mind, is racist. Here are my thoughts in a little more detail:

The feedback has already been really fascinating, and there is at least one major question I didn’t address in the original piece: what about when people of a minority or marginalized group prefer to date within their group for the purposes of solidarity and preservation of culture and traditions?

I left this out intentionally because I don’t really feel qualified to answer it, having never identified as part of a marginalized group (except for ladies, which is a moot point here). I don’t have a culture or set of traditions that it is important for me to preserve such that my dating choices would be affected. “Whiteness” is not a culture. Jewish and black friends (at least, these are the only two groups that have spoken up), both argued for an asterisk on my argument that recognized that, in the case of marginalized groups, there might be value in trying to preserve a culture or strengthen a community that might otherwise peter out if not sufficiently maintained.

What do you guys think?

Related Post: You guessed it, I’m a privileged white girl!

Related Post: Dating should not be a meal ticket.

Dating Should Not be a Meal Ticket

Did you hear about that woman in Toronto who bragged about all the free food she was getting by using her womanly wiles to lure lunkheads into paying for her meals? Oh wait, isn’t that kind of dating works?

I’ve written about the age-old question (well… say, early 70s-old) of who should pay for dates before, and my feelings have not changed. Between peers, I really can’t see any reason that men should be expected to pay for dates. Once things get going, yeah, sure, treat each other or take turns or do whatever works for you, but the assumption that the financial burden of your time together is always on him drives me a little insane.

This week, Erin Wotherspoon became a blip on the pop culture screen when her Tumblr Restaurant Tips from a Serial Dater got noticed for her professed desire to eat her way through Toronto’s finest restaurants on the dime of dudes willing to funder culinary adventures because she’s pretty. Here’s my take on transactional dating for Role/Reboot.

Your Ex-Boyfriend is HIV Positive. How Do You Feel?

This was a tough one for both structural and emotional reasons. A week ago, an ex of mine from many years ago posted on Facebook that he is HIV positive. His post included a long letter to his peers about knowing your status and living without shame. I reached out to him and he agreed to let me write about this for Role/Reboot. To read his whole note, head to YouTube, where he posted a video of himself taking his first dose of the antiretrovirals. 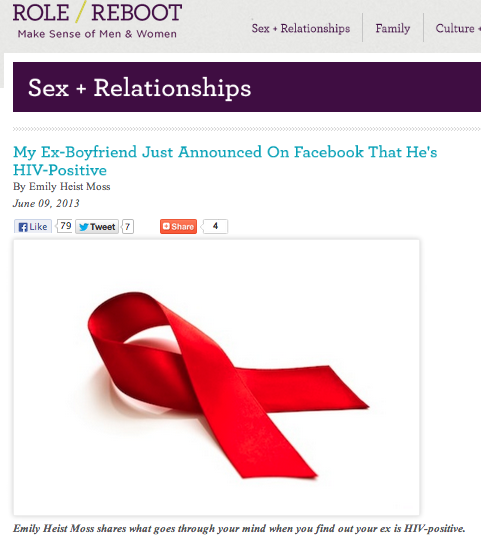 If you need help find a testing location, head here.

Related Post: So What Do You Do Exactly? HIV Testing Edition.

The “Proposal/Counter Proposal” and Other Things I Learned

When I sat down to start writing this Role/Reboot article about what straight people can borrow from their gay friends’ relationships, my roommate asked, “So have you talked to any gay people about this?”

Oh right, I should probably do that…

Turns out, my entire gchat list at 9pm on Tuesday happened to be gay friends, and they were more than willing to share. For one thing, they gave me some great quotes for my essay and some really interesting perspectives on equality, fairness, and making up your own relationship rules. More importantly, I learned about the magic of the proposal/counter-proposal, also known as the “propose, propose-back”. Wondering what I’m talking about?

This was a tough one to write. I knew I wanted to talk about the idea of “the primacy of the couple” and different kinds of love.  I knew I wanted to include some of Eric Klinenberg’s Going Solo research about the demographic trend towards solitary living. Fun fact, single-occupant homes are the most common domestic unit in America. Here’s another: the average American spends more than half their adult life unpartnered. There’s a lot more. Read the book.

Also, read my essay for Role/Reboot (title, as usual, not selected by me):

This week for Role/Reboot, I did a little internal investigation on how I behave on online dating sites. We already know how I feel about gendered traditions once we’re actually on the date (i.e. Who pays?), but what about the sending of and responding to messages? Why do I sit back and wait? Is the answer really because it’s just so freaking easy? That seems like laziness to me, and no one should rest on their laurels when it comes to equalizing the playing field, least of all ladies who write about gender and equality on the internet…

If this doesn’t make your Saturday, I don’t know what will. In the latest insufferable piece by Suzanne Venker (more on that in a moment), Fox News accidentally selected a photo of a same-sex couple to illustrate an article about the value in traditional gender roles. They’ve since changed the photo to, literally, the boy/girl stick figures that adorn bathroom doors (if that’s all you’ve got left, I think it means we’re winning), but luckily Jessica Valenti nabbed a screen shot before they figured out their awesome error.

The article this excellent photo used to sit atop is classic Venker. If you’re not familiar with her work, imagine all of the least logical things you’ve ever heard anyone say about gender roles, all the worst mischaracterizations of feminsim past and present, all of the broadest stereotypes about men and women, and give that lumpy ball of icky ideas a pulpit.

Her piece is called, “To be happy, we must admit women and men aren’t ‘equal.'” A few key ideas, though please, by all means, read the whole gd mess.

The complementary nature of marriage—in which two people work together, as equals, toward the same goal but with an appreciation for the qualities each gender brings to the table—has been obliterated. Today, husbands and wives are locked in a battle about whom does more on the home front and how they’re going to get everything done. That’s not a marriage. That’s war.

Feminism didn’t result in equality between the sexes – it resulted in mass confusion. Today, men and women have no idea who’s supposed to do what.

Prior to the 1970s, people viewed gender roles as as equally valuable. Many would argue women had the better end of the deal! It’s hard to claim women were oppressed in a nation in which men were expected to stand up when a lady enters the room or to lay down their lives to spare women life

That’s enough of that, I think.

A few notes in response:

Okay, so I’m done with that. She gets me a little riled up, you know? Can we go back to making fun of Fox?

Related Post: Things that are not the opposite of misogyny

Related Post: Can we get some historical context please?